I bough this medal of Michael Archangel to my husband, took a time to come but the time of wait was worth it. He absolutely loved it 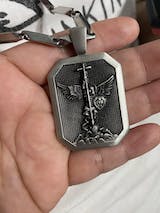 Looks REALLY good! It's actually heavier and better quality than I expected. I'm very happy with it!

a nice necklace . wear it every day.

My fiancé recently became a police officer and I bought this as a gift to protect him. He loved it! And so did I! It was absolutely beautiful and the engraving was beyond perfect! Will be purchasing again from this store! It was also fast delivery!